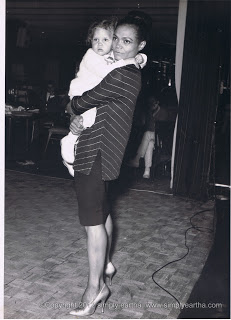 My mother (Eartha Kitt) walked into the room when I was almost done with my task. She quietly came and sat on the floor beside me. Slowly and meticulously, she reached and picked up each and every one of the discarded petals with one hand and laid them down, ever so delicately, in the palm of her other hand. I was stunned by her silence and deliberate movements. Unsure of what was happening, I watched her carefully, waiting for her expression to signal my response.

I was very young, maybe three or four and these flowers were in our suite at the Plaza Hotel in New York. They could have been roses. Or maybe pink chrysanthemums, because I seem to recall the petals were small and spiky. I don’t remember who sent them or how long they had been there – fans always sent a lot of flowers when we traveled – but I do remember that it was a huge bouquet.

Some of the petals were bright pink and slightly folded at the edges and others were a more delicate shade standing boldly at attention. As soon as I saw them I was mesmerized by their numbers. They overflowed the glass container, all struggling to be seen. A jungle of pink streamers waiting to explode. Like a magnet, I ran to their side and started to pluck all the petals off every single flower in the arrangement. Why? That, I definitely don’t remember. Probably for the same reason that people climb Mount Everest. Because they were there. And, being a small child, I went about it in the usual toddler way. Two-fisted. Handful by handful, I dropped those helpless petals onto the plush hotel carpet.

When my mother finally spoke, her voice was soft and unhurried and she began to carefully explain as she stroked a few of the petals lying lifeless in her palm with the tips of her fingers, that each one of them was a baby and that the flower heads were the mommies.The tears welled up in her eyes and trickled down her cheeks. It was like a sudden summer rain, unpredictable and surprising. Her voice grew raspier, like it, too, was wet. She told me she was crying because I had separated the flower babies from their flower mommies and that the flowers were also crying, inside. Flower tears.

I looked from her face to the denuded flower heads drooping on their stems to the dismembered petals in her hand and on the carpet. I had made my mother cry. I had made the flowers cry. I had destroyed an entire family. I was a cold-blooded killer. Me, I did it. I started to cry, unsure how to reverse this tragedy. And, we all sat, my mother and I and the flowers, on the floor crying.

Okay. Before you go running off to call social services, or at the very least, my therapist, rest assured I am not scarred for life, and none the worse for wear from this murder scene. And, I’m sure psychiatrists aren’t the only ones who could write volumes about this little scene…

Don’t forget the drama critics. Drama, with a capital “D” played a huge role in my mother’s life, and at that moment, our suite at the Plaza was her stage. Boy, she was a good actress. Too bad I was too little to know what acting was at the time, or I would have given her a standing ovation.

But, psychiatrists and drama critics aside, why did she pull a stunt like that on me? What was the point of all that histrionic hand-wringing?

My mother wanted me to have respect for every living thing easy for me to say, now, 50 plus years later.

She wanted me to make the connection between the “Action” (destroying the flowers) and the “Actor” (moi) in a visceral way— many years of therapy to understand that.

It worked. Besides feeling guilty, a light went on in me. All of a sudden, I was aware of the difference between “animate” and “inanimate.” I had a conscience – wishful thinking on my part that that is in fact true.

I am a mother now, with daughters of my own. If I had walked in and seen my child dismantling a bouquet of flowers, I probably would have started screaming, “What are you doing? Are you crazy?“ grabbing the flowers out of her hands and scaring the daylights out of her. I doubt that would have had the same impact on my little girl that my mother’s impromptu performance had on me.

I learned to have respect for every living thing.

In the million moments of our life together, my mother taught me as she had learned, in her own way. Precious little of her education was formal. Mostly, she was self-taught, a voracious reader and inquisitive world traveler.

She may have moved in mysterious ways, out of instinct and intuition. Her techniques may have been unorthodox. But, now, with the wisdom of adult hindsight, I can say she was a great teacher.

“Eartha’s words were very wise and she left you with both tangible and intangible gifts. Thanks for sharing them with us.” - L.A.V.